Vanishing Worlds: Research and Travels in the Tropics

Çağan Hakkı Şekercioğlu will speak at our March meeting on his research and travels in the tropics. Jerry Athearn sponsored him to election as a Student Member of The Explorers Club in 1999, and Çağan dedicates his presentation to Jerry.

This presentation will focus on ecological work in Uganda and Costa Rica. Çağan spent the summer of 1996 researching the effects of selective logging on tropical forest birds in Kibale Forest, Uganda, for his Harvard University undergraduate honors thesis. Last summer found him in Costa Rica, studying the effects of forest fragmentation on forest insectivorous birds and insects as part of his Ph.D. at Stanford. Çağan worked together with 4 local people and 5 American assistants to "mist net" 2302 birds, to collect, measure and identify 90,000+ insects, and to analyze 800+ bird diet samples.

Raised in Turkey, Mr. Şekercioğlu came to this country to go to college. He earned a BA in biology and anthropology from Harvard University in 1997. Now, he is in the second year of his Ph.D. at the Center for Conservation Biology at Stanford, with Paul Ehrlich as his advisor.

Çağan is a founding member and Associate Editor of the Yelkovan-Ornithological Journal of Turkey. He has travelled to all the continents and has done ecological research on six, including work at the Rocky Mountain Biological Laboratory, Colorado and the Atherton Tablelands, Australia in 1995, Wrangell-St Elias, Alaska in 1997, Jasper Ridge at Stanford in 1999.

Some of his excellent photography is displayed on his website: http://jasper1.stanford.edu/~cagan/main.htm. If this is any indication, the program on March 31st will be beautiful as well as informative.

With deep regret, we want to share with you that Folger "Jerry" Athearn, Jr., CDR USNR (Ret), MN 1982, died at home on Thursday, February 10th, after months of battling pancreatic cancer. Jerry was a great friend and supporter of The Explorers Club and we will all miss his cheerful vitality and amazing spirit.

The Memorial Service was held on Friday, February 18th, at the 1st Presbyterian Church of Berkeley. Friends from many communities came to remember Jerry: we heard from a colleague in the transportation industry, a fellow fraternity trustee, friends from church, his family, and others. Bob Schmieder spoke on behalf of The Explorers Club.

Listening through tears, we gained an appreciation of how very far his influence reached, and how deeply he touched the lives of those who knew him. JoAnn, thank you for including us all, and for sharing him with us. We miss him already. 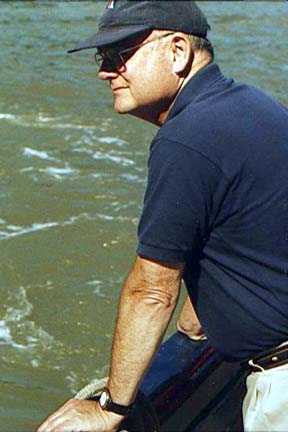 Jerry Athearn in the Antarctic in 1959/60. LTJG Folger Athearn, Disbursing Officer, is on the right discussing supply problems with LCDR John E. McEnearney, Supply Officer. They were responsible for ordering and transporting supplies and equipment for the four American Antarctic stations. Photograph by Jerry Hughes

Nonna Cheatham brought many friends from the Society of Women Geographers and an array of colorful Earthwatch information.

Sue Estey and Tom Patterson kayaked the Cosumnes River last weekend, starting from the Nature Conservancy's Preserve just upstream of its confluence with the Mokelumne River. Sand Hill Cranes flew overhead, uttering a rattling cry, and an owl hooted from the flooded woods.

Mike Diggles announced that our difficulty in seeing his website for the chapter has been due to overwhelming interest in information posted about the Chi-Chi earthquake in Japan, information for which has been residing on the same server. A new Apache-server machine is allowing better access to the site.

Lesley Ewing brought a copy of her first international publication; it is in Japanese, which leads to her interest in finding a friendly translator so she may be reassured that it still says exactly what she remembers writing about coastal erosion.

Letha Hadady, a colleague of our speaker, Michael Foster, announced that she would lead a tour of Chinese herb shops in Chinatown the day after our meeting.

Tom Hall's wife, Liz McLoughlin, is headed for India on Wednesday, but expects to be back, and I believe she may give a brief presentation about her cross country bicycle expedition of last summer at our next meeting.

Louise Heynemann gave a big birthday party for Don, inviting guests to bring remembrances of good times past and adventures shared, celebrating his life whilst it is still most assuredly underway.

Libby Ingalls, Chair of the Society of Women Geographers, introduced several fellow geographers to us, including her co-chair Linda Liscom, Charlie Little, and Ed Power, Jr.

Herb Lingl, guest of Mort Beebe, invited us all to the presentation, Aerial Visionaries, to be held April 11 at SFMOMA.

Arlene Blum (Annapurna, a woman's place is on top) has been hiking in Tilden Park and raising her daughter, now 13. She has done considerable research into the routes taken by Alexandra David-Neel.

Eva Blum is looking for responsible, experienced pig hunters to reduce the feral pig population on the land she owns and several hundred adjoining acres in the Santa Cruz mountains.

Graham Hawkes has been working on a two-person underwater flying machine, so people will be able to take training "flights".

Dana Isherwood stopped in to see friends and sell raffle tickets before heading off to the magnetic North Pole this April.

RAIDERS OF THE LOST TREASURES

Dr Alexander Leskov is a distinguished member of the Ukrainian Academy of Sciences. He is an archaeologist with more than a quarter-century of work on ancient Eurasian cultures with a special interest in the Scythians. His specialty is the Bronze and Iron Age and he has excavated over 400 burials. He was a consultant for the book "The First Horsemen" which is part of the Time-Life Emergence of Man series.

The current exhibit "Gold of the Nomads" includes several of his finds. The exhibit is the cover story of Smithsonian Magazine's March 2000 issue. He was the closing speaker at the first venue at the San Antonio Museum of Art, one of the two institutions which sponsored the exhibit.

GOLD OF THE NOMADS

The exhibit schedule is: