A Memoir of Life, Death, and Transformation on Wild Water

It's tempting to write off The Lost River as just another adventure story. It certainly has all the trappings of a formulaic action blockbuster--raging rapids, hungry crocodiles, mysterious natives, even the lost Ark of the Covenant. But as veteran river-runner Richard Bangs chronicles his lifelong pursuit of "aqua incognita," he proves a refreshingly introspective adventurer, a thinking man's Indiana Jones. Not content to justify his risky forays onto earth's wildest water with a glib "because it's there," he crafts an intimate journal of his astounding trips and scrutinizes the adventure travel industry he helped create.

In the early 1970s, adventurer-author Richard Bangs and his buddies set out to run the last unexplored rivers in Africa--the Baro, the Blue Nile, the Omo, the Awash--and finally realized their goal by rafting the Tekeze some 23 years later. His latest book, The Lost River, chronicles these extraordinary leaps into uncharted waters and explores the bonds forged--and the price paid--in the pursuit of extreme adventure.

Richard's book, The Lost River, won in the NOBA literature category. Winners are selected by a national panel of expert judges consisting of educators, outdoor columnists, book reviewers and trade representatives. NOBA is the outdoor world's largest and most prestigious book award program.

Since the early 1970s, Richard Bangs has been in the vanguard of river exploration. He is particularly known for his bold ventures deep into the recesses of Africa. In nearly a dozen books, Bangs has written of his experiences, but in The Lost Riverwe see and learn more of him than ever before. Primarily this book is about his 1996 pioneering run of Ethiopia's Tekeze River, but the most interesting and telling part of the story is the long, and sometimes tragic, path which led him there.

Macduff Everton, river guide, says "Our body is largely composed of water. Richard Bangs shows us our attraction to water can be delightful, glorious, and sometimes fatal. The Lost River reads like a good river trip - with rambunctious and ribald rapids and eddies of insight and human warmth. Paddle or die!

The San Mateo Coast Natural History Association hosts Sealabration, a special fund raising tour to support the educational and interpretive programs at Año Nuevo and other state parks of the San Mateo coast. The seals are more active first thing in the morning while it's still cool. For this special event, there are three time slots. The 8:30 slot is sold out, so select the 10:30 AM slot with Eve Iverson if possible. Lunch is included, served in the Visitor Center from 11 to 3. Donation is $75, of which $55 is tax-deductible. For more information, check the web site: http://www.anonuevo.org/sealabration.html For reservations, call 877-884-7325. 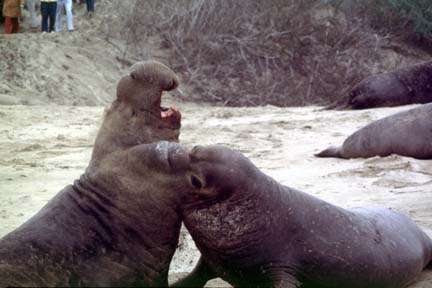 Dana Isherwood returned to Antarctica to climb the Vinson Massif in December. After 4 days delay in Punta Arenas, the team flew in to Patriot Hills, then to Vinson Base Camp. This expedition was successful, as four climbers made the summit in spite of variable, often stormy weather. Dana strained her back while carrying a double load up to one of the camps, and turned back just 1200 feet from the summit. Willi Prittie, the AAI guide, carried out her mission to fly a dozen tribute flags from the summit, each one honoring a woman who has had breast cancer. On the web, mountain-zone.com published a series of dispatches from the team.

Bill Isherwood's objective this winter was the summit of Ama Dablam. He was to warm up with an acclimatization climb of Imja Tse (Island Peak). Bill got back from Nepal mid-December. He had a cold or flu much of the time and could not breathe well at high elevations. He came home a little early and no one in his group reached the summit. One of his climbing partners tried to summit alone, and fell in a crevasse soon after roping in. He was rescued by a passing climber, but hurt his arm and broke his thumb. Sometimes Murphy's Law rules.

The Achuar, people of the Amazon basin of Eastern Ecuador, live intimately with the plants and animals of their world in a culture of dreams. "All plants and animals have their own language, and we know some of these languages very well." Plants contribute to the dreams: to dream on Datura, go into the forest, soak the stem of the plant in cold water, then drink a quart of the tea. People start to talk to you; you feel connected to the forest; you are unconscious for three days, and have visions of the future. Shamans enter an altered state of consciousness; they can look at a person and see what's wrong, then find a cure.

There are two million acres of jungle, invaded by no mining, drilling, logging, or roads. There are perhaps four dirt airstrips. Plans for mining and development threaten this life. We lose one football field of rainforest every second. Burlington Resources of Texas wants to explore for oil. Another area that suffered this now is beset with alcoholism and prostitution. The Achuar are working with others to prevent this in their land.

Our speaker, Larry Lansburgh, is working with the Achuar on a documentary film. The Achuar have determined the content of the film, and filming will begin this month. A Quechua shaman says there is an ancient prophecy, that near the end of the century the Eagle (the rational people of the North) and the Condor (the intuitive people of the South) will come together. Neither will dominate, but they will combine forces and fly wingtip to wingtip. As an Australian aborigine said, "If you are coming to help me you are wasting your time, but if you are coming because your well being and my well being will benefit from working together, then you are welcome."

Mike Diggles, FN-92, geologist and Chapter Web Master, showed slides and told stories from his 23 years of visits to the elephant seal colony at Año Nuevo State Reserve, north of Santa Cruz. Mike tells the story very eloquently and his slides look as if he were mere inches from many of his subjects. In reality such close-up photography can be dangerous with such large animals and resource managers have decided that if you are closer that 20 feet from an elephant seal, you are harassing it - even if you were minding your own business and the elephant seal decided to come close to you. To avoid these concerns, Mike annually totes his mega-jumbo lens, camera and trusty tripod out to the dunes and keeps his distance from the seals.

Año Nuevo is located just an hour or so south of San Francisco and has been a preferred haul out area for female elephant seals since the early 1960's. The general schedule of events has bull seals arriving from early December through January to establish turf rights. Pregnant females come ashore from late December to early February to give birth and then nurse their pups. The females will mate after the pup has finished nursing and most of the adults are back in the ocean by early March. After mom leaves, the weaner pups lay around in the sun, practice swimming and don't leave Año Nuevo until late March or April.

Throughout this whole process, the males fight for breeding rights. They fight for key beach positions where they expect the females to haul out. They fight while the females are giving birth. They fight during the month that the pups are nursing and gaining incredible amounts of weight each day. Then things get a bit more serious and the males fight to breed with the available females. And when nothing else is going on, the males fight anyway, just to keep in practice. A lot of the fighting is bravado. Males will bark loudly and often the loudest bark will win. If barking is not enough, the males may just display their proboscis. Only the males get the large noses and apparently a good glance at this magnificent appendage can be enough to let some males size each other up and establish a general pecking order. If vocal and visual displays are not enough, the males will strike each other. Even the juveniles fight, although they have little chance of establishing dominance over the larger, older males - it's practice for later years when they may be the big seal on the beach. --Lesley Ewing

Come to an evening show at SFMOMA featuring astronaut Story Musgrave and special guests, organized by the ASMP (American Society of Media Photographers). Social hour at 6 PM, Show at 7 PM. The "early bird" ticket cost is $12.50. Please mail your preregistration check early. Payment must be received by ASMP, P.O. Box 475066 SF 94147-5066 by February 7. Tickets will not be sent to you, simply give your name at the door. More information to follow (and the cost will rise).

The club is on the waterfront in northern San Francisco. From downtown or the east bay, find your way to Marina Blvd and follow it west past Fort Mason. Turn right past the yacht harbor.

From the Peninsula or Marin County, take Doyle Drive east to Marina Blvd. You cannot turn left into the road to the club, so take a tight turn just before Marina Blvd and come back under the freeway, or go a few blocks past and and come back along the marina green.

The Explorers Club Annual Dinner will be held on March 25, 2000, at the Waldorf Astoria Hotel in New York City. This is a great opportunity to visit headquarters and have your photo taken next to the narwhal tusk. Mort Beebe has a video of last year's event, which he showed at our December meeting.

With a dress code of "white or black tie, native dress and decorations, the ECAD is a spectacle with ceremony, a ballroom full of tales of adventure and research, men and women daring in deed and costume, medals gleaming, ribbons decorating, and exotic snippets of who knows what to nibble before dinner. The speakers this year have walked on the moon, unwrapped Inca mummies from icy mountaintops, restored wolves to Yellowstone, to cite a few. The ECAD is a must-do at least once a millennium, and it's a great excuse to spend a few days in New York.

If you want west coast companions, be sure to specify "Northern California Chapter" as your seating request on the reservation form. Reservations may also be made by telephone: 212-628-8383.

Last month we included a form for you to fill out so we can update our records and provide a fresh roster for our members. If you have not already done so, please fill out the form and mail it to Lesley Ewing. If you cannot find your form, call or email Sue Estey (sestey@earthlink.net) and we will mail or email you another one.

Back to The Explorers Club, Northern California Chapter Home Page