The Northern California Chapter of The Explorers Club has scheduled two dinner meetings during January 1999 where two world-class experts will make presentations about global climate change. Dr. Benjamin Santer of the Lawrence Livermore National Laboratory will speak at the University Club in San Francisco. Ben was the lead author of the controversial chapter in the International Global Climate Change Conference Report stating that there now appears ample evidence to suggest an anthropogenic component of the global warming we are experiencing. This first meeting is scheduled to begin at 6:30 PM on Friday, 22 January. The second of the chapter's two January dinner meetings will be held at John Ascuaga's Nugget Casino Resort in Sparks, Nevada. Dr. Robert A. Wharton, Jr., Ph.D. FN-84, Vice President for Research at the Desert Research Institute in Reno, Nev., who headed the long term research project in Antarctica's McMurdo Dry Valleys will make his presentation. Dr. Wharton is quoted extensively in an article about this project that was just published in the October 1998 issue of National Geographic Magazine. The second meeting begins at 6:45 PM on Saturday, 30 January.

This is the first time that the Northern California Chapter has scheduled a meeting in the Reno / Sparks, Nevada area. This dinner meeting was scheduled in a hotel facility with ample parking, which is located just one-half block from Amtrak's Sparks station, at a time on a Saturday evening to permit residents of Northern California who are winter sports enthusiasts to ski before and/after the meeting. Those who are less athletically inclined can enjoy a relaxing time just looking at the snow while visiting with other club members as they ride in comfort over Donner Summit on Amtrak's California Zephyr. Train 6, departs Emeryville, Calif. on Saturday, 30 January at 10:40 AM. It stops to pickup passengers in Martinez at 11:26 AM, Davis at 12:19 PM, Sacramento at 12:55 PM, Roseville at 1:17 PM, Truckee at 4:28 PM, and arrives in Sparks at 5:57 PM. Attendees can return to California on Amtrak's train 5 which is scheduled to depart Sparks, Nev. on Sunday, 31 January at 9:41 AM and is due to arrive back in Emeryville, Calif. at 5:30 PM. There are coordinated bus and train connections to Central Valley points at Martinez and Sacramento. There is connecting Amtrak bus service departing from San Francisco for Emeryville at 9:10 AM.

By reserving space on these trains, attendees can avoid driving in the snow. Amtrak has blocked a group of seats for this event, but because group tickets must be purchased at least 45 days in advance to qualify for the very substantial group discount of $130, reservations (accompanied by a check in full payment) must be must be received by Jerry Athearn in Oakland no later than Monday, 14 December 1998. Use the coupon at the bottom of this newsletter to make reservations. Although transferable, once purchased, Sparks reservations and train tickets are not refundable. The Chapter cannot handle hotel reservations. Attendees desiring to make hotel reservations for the night of 30 January at John Ascuaga's Nugget Casino Resort in Sparks, should call direct to the hotel's reservations desk at 1 (800) 843-2427. 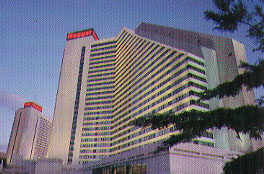 In 1995, the Intergovernmental Panel on Climate Change (IPCC) concluded that "the balance of evidence suggests a discernible human influence on global climate". This talk will discuss key aspects of the scientific evidence that led to the IPCC's historic conclusion. It will focus on two topics. The first deals with so-called "fingerprint" studies, in which scientists compare observed patterns of climate change, such as temperature fields at the Earth's surface, with predictions made by computer models of the climate system. Such research is useful in gaining an improved understanding of the causes of climate change. The second topic covers recent attempts to resolve the disagreement between thermometer measurements of atmospheric temperature change at the Earth's surface and estimates of temperature change derived from satellites.

Ben Santer was born in Washington D.C. in 1955. In 1966, his father took a position with an American company in Germany, and transplanted the entire Santer family to Dortmund. Ben attended a British Army school, where he was the only student who could not play soccer, rugby, or cricket. After completing his British University entrance examinations, Ben attended the University of East Anglia in Norwich, England, where he obtained his B.Sc. in Environmental Sciences (with First Class Honors) in 1976. While at East Anglia Ben was introduced to mountaineering and rock-climbing, twin hobbies which he still pursues actively (although somewhat less actively than in his student days). In 1983, Ben decided pursue his interest in climate modeling and enrolled in a Ph.D. program at the Climatic Research Unit of the University of East Anglia. His thesis supervisor was Prof. Tom Wigley, and the subject of his research was the use of Monte Carlo methods in the validation of climate models. He obtained his Ph.D. in climatology in 1987, and immediately thereafter took up a post-doctoral position at the Max-Planck Institute for Meteorology in Hamburg, Germany. It was the director of the Max-Planck Institute, Prof. Klaus Hasselmann, who first suggested that Ben should direct his attention towards the problem of identifying a human-induced "signal" in observed records of climate-change. After spending five years in Hamburg, Ben joined Prof. Larry Gates' group at the Program for Climate Model Diagnosis and Intercomparison (PCMDI) at Lawrence Livermore National Laboratory. Ben's research at PCMDI focuses on model validation and climate-change detection and attribution. In 1994, Ben was asked to act as Convening Lead Author of Chapter 8 ("Detection of Climate Change and Attribution of Causes") of the 1995 Report by the Intergovernmental Panel on Climate Change. Ben's involvement with the IPCC Report was an experience best described as "character-building". When not searching for "fingerprints" of human activities on climate, Ben is usually exploring California with his five-year-old son Nicholas.

ABOUT THE JANUARY 30 LECTURE

Dr. Robert A. Wharton, FN-84 will make the January 30, 1999 presentation of The Explorers Club at a meeting held in Reno, Nevada. He is Vice President for Research, and Research Professor at the Desert Research Institute's Biological Sciences Center in Reno. He has an international reputation for his studies of cold desert environments in polar regions and is particularly well known for his research of perennially ice-covered lakes in Antarctica. Dr. Wharton developed and led the NSF-funded McMurdo Dry Valleys, Antarctica, Long-Term Ecological Research (LTER) project for five years which involved extensive field work. He has developed and led NASA/NSF supported studies of ice-covered lakes in the Arctic and Antarctica as terrestrial analogs of early Martian environments. Wharton developed and led a joint NASA/NSF supported project to test technologies relevant to the exploration of Mars.

Dr. Wharton received his B.A (Botany) and M.A. (Biology) from Humboldt State University and his Ph.D. (Botany from Virginia Polytechnic Institute. As Vice President for Research, Dr. Wharton provides scientific vision and leadership for the Desert Research Institute's 400 faculty and staff through the development and implementation of business, marketing, and strategic plans. His research areas include polar ecology, microbiology of extreme environments, cold deserts, space exploration, the Arctic, Antarctica, Mars, and Europa.